Beauty standards are a weird thing... 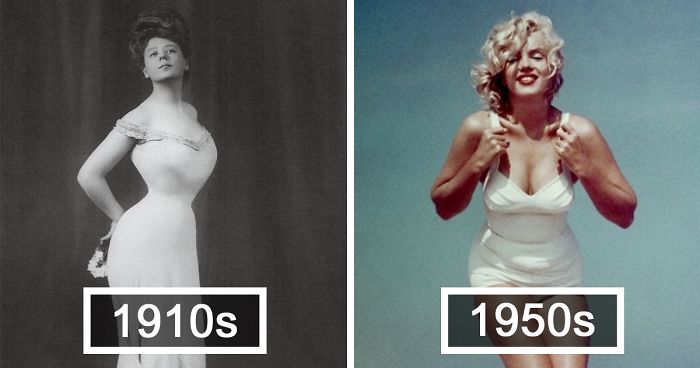 Beauty standards are a weird thing. They seem to change from decade to decade, which pretty much means that someone that we find attractive now, might become someone that no longer is considered attractive in ten, fifteen years. Of course, the opposite can also apply, so I guess there’s always hope.

To keep up with the changes, let’s take a look at the ways in which beauty standards have changed in the last 100 years.

A little over a century ago, the most attractive female form was the “Gibson Girl”. They got their name from Charles Dana Gibson, an illustrator that drew the female form and because of it somehow single-handedly decided the beauty standards for an entire decade.

The roaring twenties toned the beauty standards down a notch. Flapper girls, as they were called, were the ultimate form of beauty in that decade. They were mostly defined by their short haircuts, short skirts, interest in Jazz music and being somewhat rebellious in nature.

After the curvy Gibson Girls and the somewhat more normal-looking Flapper girls, the 30s welcomed back curves in the female beauty standards. This is when the first typical “blond bombshells” start showing up on the silver screen.

Stop me if you’re seeing a pattern here, but a decade after the curvier bombshells hit the silver screen, beauty standards shifted back to skinnier girls. The so-called “screen queens”, think Katherine Hepburn, were the ultimate beauty standard for women in that decade.

15 Awesome Things You Will Only Find In South Korea

Pets grow up so fast. Most of us didn't even notice how...

Kim and Kanye have been married since 2014 and it seemed...

Madonna is one of the few celebrities whose first name...

If we stop and pause for a second, we may well see the...

How Bad Is It To Eat Spicy Food While Pregnant?

Some moms-to-be go for sweet and salty, others say spicy food is what the baby wants....

This Was The Last Major Movie Released On VHS

The last big Hollywood film released on VHS tape might be more recent than you think....

The One Thing You Always Want To See On Your Supplement...

When purchasing a dietary supplement, check the container for a yellow and green...

What To Do If You Need To Give Somebody CPR

Knowing CPR and performing it correctly can make the difference between life and...

Woman Asks If She Was Wrong To ‘Upstage’ The Bride On Her...

"On my way home, I got flooded with calls from her mother and new husband that I...

Most skincare products can benefit from being kept in a beauty fridge, but there...

Creep Stalks Model And Watches Her Sleep In Bed At Night,...

The camera caught the stalker watching the model while she was sleeping. The post...

"The Simpsons" is one of the most beloved shows in TV history. We rank all 32 seasons...